A farmers paddock... a few 16 year old boys... toss in a football, and suddenly Suburbs is under way. It all began way back in 1916, on farmer Whitten's paddock at the corner of Titirangi Road and Great North Road. A few of the local boys, with a real keenness to have a go at this rugby game, got together a team to play the club from over the hill at Waikumete. The result turned out to be a 6-8 loss, but New Lynn challenged again for a return match on the home paddock. They ran out 18-6 winners in this their only other game of that first year. Enthusiasm grew with the boys - they now had a football per courtesy of Mr. Whitten - and they decided to enter the A.R.D. championships in the next season. 1917 saw Tommy Atkins return from the A.R.D. annual meeting with the message that "an organised club, with a president, a secretary, and a treasurer all under the wing of a Senior club would have to be formed." Back to the paddock. Here Mr. A Seabrook was duly elected president, Mr. Phil Seabrook secretary/treasurer and the club was called the "New Lynn Rugby Football Club" under the sponsorship of the Railway Club. Headquarters for training were the farm paddocks when fine, and Mr. Seabrook's cow shed when it rained. The Club fielded one 4th grade team, resplendent in a black jersey with a white star on the left shoulder.

Here come the Red and Blues

1918 can rightly be called year one in the history of Suburbs. For it was in this year, at an "annual meeting" in a Mr. Tierney's Avondale barber shop, that the name Suburbs was adopted.

And what a meeting it must have been. Tommy Atkins presided from a barber’s chair, vacating whenever a customer came in. Everyone had their say - barber, customer and football club members.

But why the name Suburbs? Tommy Atkins recalled the choice mainly because players were coming from Avondale, Point Chevalier, Mount Albert and Epsom to play for the Club, and boys from New Lynn, at that stage, made up only a small percentage of the players. It was at this meeting that the club colours were set down as red and blue jersey pattern to be 4" hoops in alternate colours.

(These jerseys, however, proved unprocurable at the time and the newly formed club did in fact play in yellow and black jerseys for their first two seasons).

1918 proved a momentous year for Suburbs. Not only did they have a new name and club colours, but also they found a "home". It was this year that the Avondale Jockey Club offered the Club the use of their grounds for playing fields and the racecourse facilities for dressing rooms. The Club fielded two teams, a 3rd and 4th grade, in the AR.U. Championships.

Our own plot of ground

210 pounds was the purchase price. 10 pounds deposit with easy payments over three years was how it was bought. Not much money by today's standards, but a lot of money in 1922 - the year the Club purchased the property on which the present clubrooms and training shed are built. The following year saw the Club's first working bee called for all hands to turn out and clear the section ready for the training shed. Such was the effort of the faithful few that late in the season of 1923 the shed was far enough advanced for teams to use - training by gaslight.

The 1932 season brought a request from the A.R.U. that Suburbs, Oratia, Waitemata and Eden clubs pool their resources and operate as one club.

A sub-union was even suggested. Such a move would have obviously resulted in change of name (the name "Western Suburbs" was mooted), loss of identity and virtual extinction of the Suburbs club.

Three cheers for our strong-minded and forward thinking club administrators of the time. At the time a momentous decision - years later proved it to be a wise one.

The club monogram and a professional coach?

The increasing success of the Club teams in A.R.U. championships surely prompted the design of the Suburbs monogram. A flaming Olympic torch, sheathed in victor's laurel leaves incorporating the name Suburbs on a scroll, was first introduced into the Club in 1935. It has been the official club badge ever since. Perhaps it was the feat of the Club in winning the Silver Football the year before, which inspired the design.

1935 is also remembered as the year a Mr. Harris was appointed coach to the Club on a salary of 101 - per week. Conditions of employment were such that he attended two nights per week. How long this appointment lasted is unknown, and the offer has never since been repeated.

Suburbs reaches the top, and gets a new jersey

1939 and Senior "A" status, the cause for much rejoicing and celebration at the Club. A fine effort by a magnificent team. Three players who are vividly remembered from this team are Charlie Brady, the late Denny Brady and "Bim" Underwood.

The Suburbs team of 1939 played such an exciting brand of rugby that they attracted huge public followings to their matches, especially at Eden Park, and in the years to follow they were always the "yardstick" that other teams were compared with.

This Senior "A" year was also the year the Club introduced the new and now familiar jersey design.

1939 also saw the AR.U. Southland Shield awarded to the club whose three best Junior Teams show the highest average of points at the end of section play - won by Suburbs, and the Club was again runners up for the AR.U. Silver  Football. Suburbs were well and truly making the scene in Auckland Rugby. Club stalwarts were making progress at the Club headquarters too, and concrete foundations and walls were added to the side of the training shed. Suburbs could now boast a training shed with separate dressing rooms, plus added luxury of two cold showers. 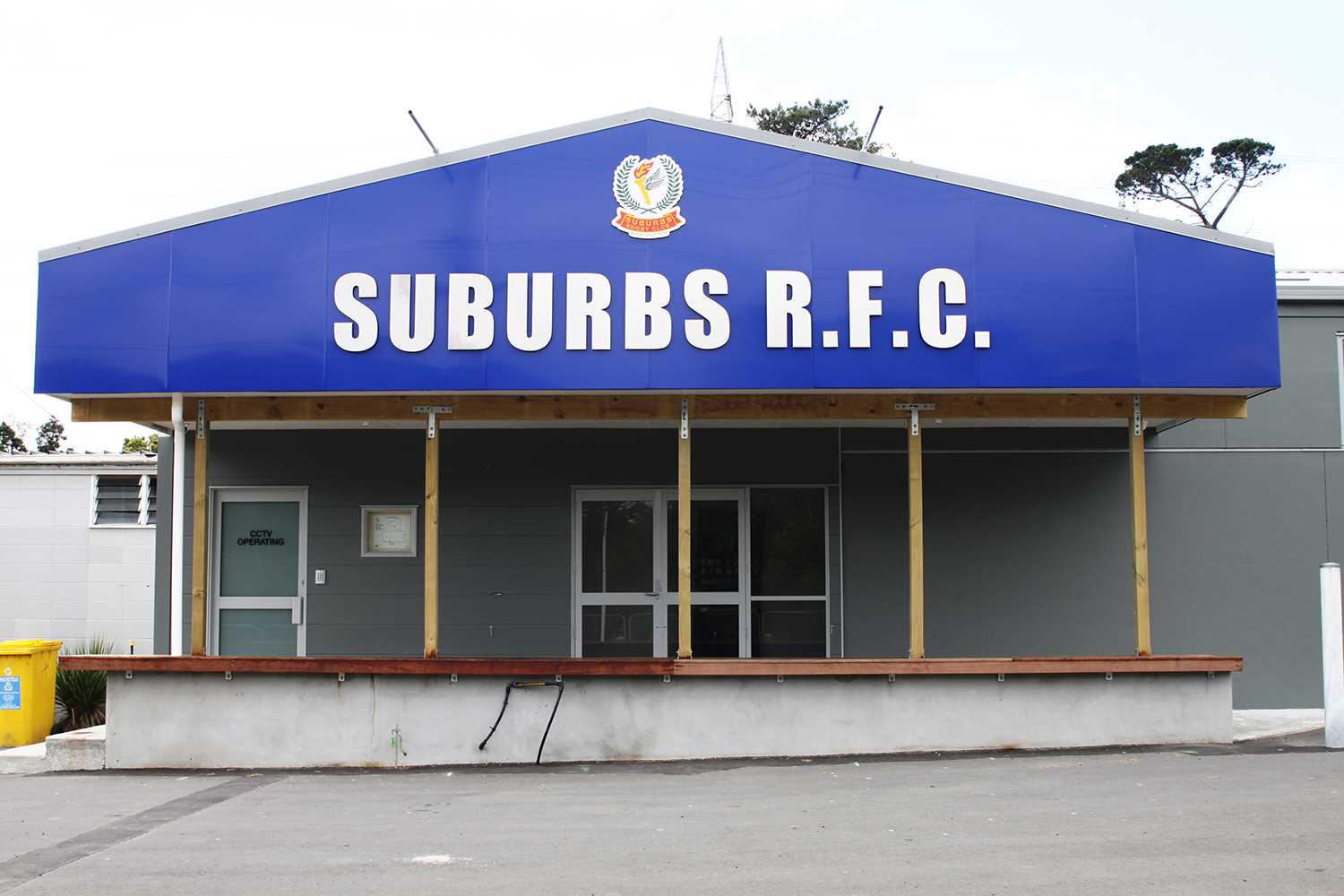